Grayson Perry burst into the public consciousness in 2003 when he won the Turner Prize. He works across many media starting in ceramics and more recently tapestry, bronze, print-making, architecture and the outrageously flamboyant frocks that he wears when he goes out dressed as a woman, which are works of art in their own right.

The Craft Council has acquired two Grayson Perry Tapestries called Julie Cope’s Grand Tour: A story of a Life by Grayson Perry, are touring the UK.

The exhibition is introduced;

Julie is a fictional character created by Grayson Perry – an Essex everywoman whose story he has told through the two tapestries that illustrate the key events in the heroine’s journey from her birth during the Canvey Island floods of 1953 to her untimely death in a tragic accident on a Colchester street. Rich in cultural and architectural details, the tapestries contain a social history of Essex and modern Britain that everyone can relate to. 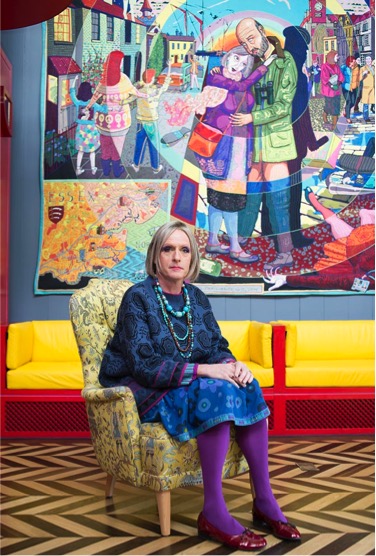 In collaboration with Grayson Perry and Fish In a Bottle The Crafts Council have created a web app which allows you to explore The Essex House Tapestries: The Life of Julie Cope (2015). Within the app you can find out about the technical, historical and narrative elements that went into A Perfect Match and In its Familiarity, Golden.

The app is available on mobile and desktop and can also be accessed within the gallery. To access the app click below.

I absolutely adore all aspects of the work of Grayson Perry. Last year I saw 6 tapestries with my mother and my 13 year old son and all of us were blown away by the experience. If you ever have a chance do try and see “The Vanity of small differences”.

The tapestries depicting the class journey through life of a fictional character called Tim Rakewell. The work was inspired by the painting by William Hogarth “A Rake’s Progress”. He starts from a modest background and rockets up the social, financial and so called class ladder before his untimely demise. 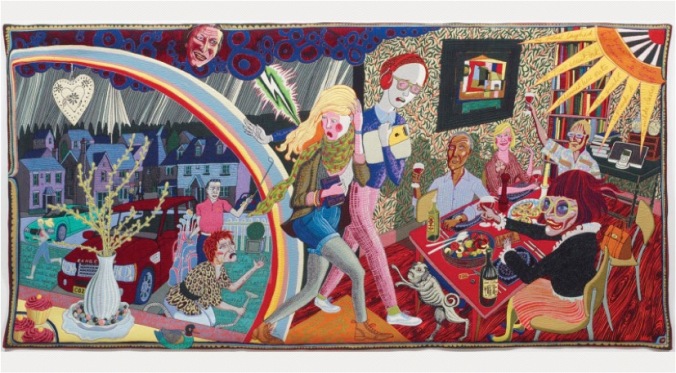 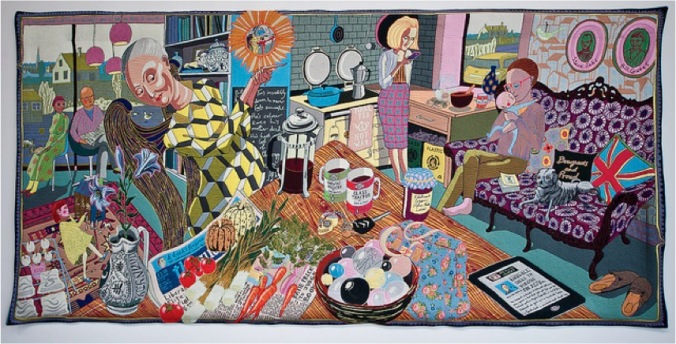 The tapestries are colourful and exiting full of humour, social comment and yet ever so charming. There is so much to each one but you have to take the time to truly look.

The Vanity of Small Differences is jointly owned by the British Council Collection and the Arts Council Collection, Southbank Centre, London. Gift of the artist and Victoria Miro Gallery, with the support of Channel 4 Television, the Art Fund and Sfumato Foundation with additional support from Alix Partners. 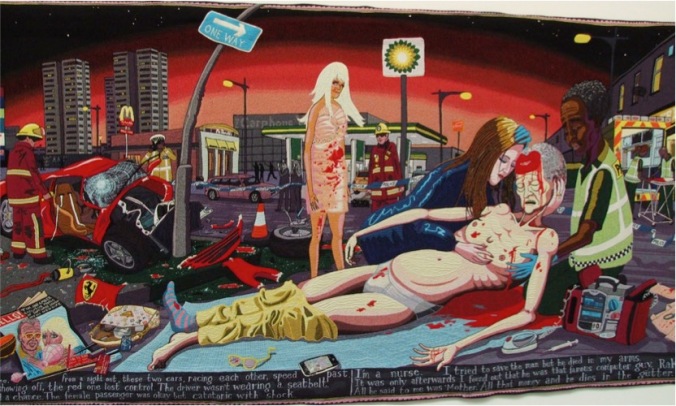 The tapestries are currently being exhibited in the Ukraine.

The Arts Council Collection launched an app for iPad and iPhone produced by Aimer Media with commentary from the artist, art historical references and a guide to the making of the works. The app gives audiences the chance to see the tapestries up close with its detailed zoom facility and listen to Perry’s own audio guide. Grayson Perry: The Vanity of Small Differences is available on the App Store.